I wrote in my December blog post that I thought our market had changed so dramatically on November 8, 2018, that we would forever refer to the Chico/Paradise real estate market in terms of pre- and post-fire. Here we are 8 months later, and while I am beginning to think it might not actually be forever, we are certainly still referring to prices as pre-fire and post-fire prices. . . That said, while the Paradise/Magalia market is still a big question mark from day-to-day, the Chico Market is beginning to stabilize. We are hitting a new “post-fire” normal. 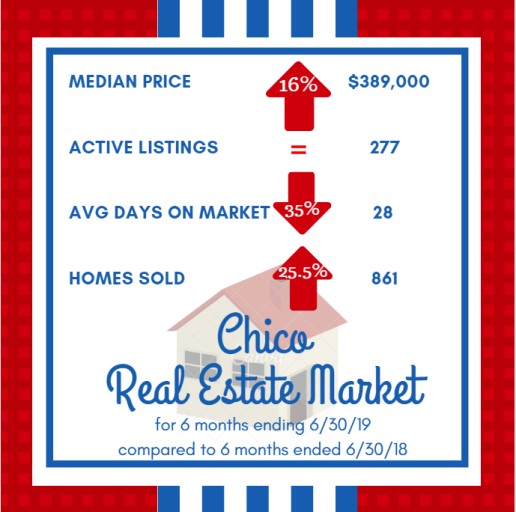 In June of 2018, there was an average of 274 homes on the market, with average inventory levels peaking at 333 homes in August of 2018. In the weeks following the fire, inventory was almost completely wiped out, the low was about 50 homes by December. Since then, inventory levels have steadily climbed to an average of 277 homes in June of 2019. I believe these inventory levels have climbed, and will continue to do so for two reasons. First, the “desperation” has left the market. The buyers that had to have a place to live have landed – either into a rental, a purchased home, or have left the area (permanently or for the time being).That’s not to say that there aren’t plenty of buyers... there are…they just have a roof over their heads, and are shopping for a home that meets both their requirements and their budget and aren’t rushing to buy.

The second and more surprising factor in our ballooning inventory is simply the number of sellers. I suppose it’s no surprise that with demand soaring and prices rising, homeowners are choosing to sell. 861 homes have sold in Chico in the first six months of 2019. . .that is a whopping increase of 25.5% over the same period in 2018. With prices at all time highs, sellers who had been considering leaving the area have not only been enticed by selling high to make a change, but in many cases felt a sense of doing something to help their community by freeing up housing. The downside of the increase in home sales have been that many of these sales had been investment properties. . . non-owner occupied owners who, understandably recognized that now was the time to exit their investment (by definition an investment is something you buy low and sell high). This has made the rental market unbelievably tight and certainly has caused a ripple effect into our available workforce.

So where are we now? Median/Average prices peaked in March 2019 as homes that had entered escrow in the weeks following the fire were closing (at top dollar given the desperation and resulting bidding wars). Prices have definitely levelized at this point, with the median sales price up 16% to $389,000 for the six months ending June 30 2019, compared to the first half of 2018. Average prices for the same period were up 17.6% to $424,000. Homes are still selling quickly with average days on the market down 35% to 28 days. The median days on market is only 7 days. This means it is still a GREAT time to be selling in Chico. Does this mean it’s a terrible time to buy? I don’t exactly have a crystal ball, but I believe that inventory levels are still low enough and demand is still strong enough that prices are going to hold steady for the foreseeable future. Chico is still an affordable option for housing in California and with interest rates hovering around 4%, it still makes sense to own!

Email Us / Ask A Question